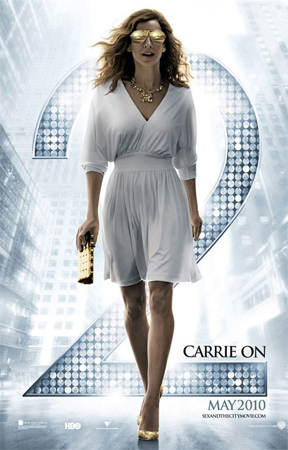 During a recent visit to the theater to see Nine, I was thrilled to be able to view the trailer for Sex and the City 2 during the previews. Let me tell you…that was worth the price of admission alone.

On May 28, 2010, women across the globe will delight in an afternoon away from the boudoir to enjoy Sex and the City 2 with a group of their closest girlfriends. Until then, you can view updates about the movie, including photos, interviews from the cast and more on sexandthecitymovie.org.

I am pleased to say that I just made a purchase that will allow me to better prepare for the movie and sooth my Carrie fever until the release. I pre-ordered two copies of The Carrie Diaries by Candace Bushnell; the prequel to Sex and the City. Sex and the City (the book) was also written by Bushnell and was the basis for the show on HBO and the movie.

Here is a write-up about the book from examiner.com:

Did you ever wonder how Carrie Bradshaw got to be so fabulous? Well now you can find out who Carrie was before the Manolos, in Candace Bushnell’s latest books, The Carrie Diaries, set to be released April 27, 2010, just one month before the new SATC movie hits theaters.

The first in a two book series, The Carrie Diaries will chronicle Carrie Bradshaw’s teen years, following her as she develops her fashion sense, creating trends only Carrie could make popular. The book will also go along for the ride of Carrie’s first love, which is sure to explain how Ms. Bradshaw got her start in writing about her crazy relationships.

The most exciting thing will be who are Carrie’s friends? Teenage Carrie means pre-Miranda, Samantha, and Charlotte, so will the new friends be mini-clones of the fab four? You’ll just have to wait and see, as details on this book are slow coming. But for those who have a hard time waiting, here is the cover art for the new book.

The CW channel should be all over this book, as a television series is a must. An ’80’s flashback to the making of Carrie Bradshaw would no doubt be a huge hit.